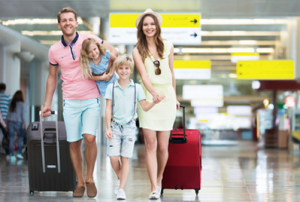 It’s no surprise to learn that airports are germ infested. In fact, its very common to feel sick after a vacation or traveling. Sure, you can get ill from the airborne germs you’re surrounded by, but a new study says that you’re more likely to get sick from the surfaces you touch.

According to InsuranceQuotes.com, a Texas-based insurance website, the dirtiest place in an airport is the self-help kiosk that you use to check-in. These fancy kiosks have more than 1,475 times the number of bacteria on them than your toilet seat at home.

While these check-in screens are the dirtiest spots by a long shot, there are other germ-infested areas of the airport as well. Some other places to be wary of include gate bench armrests and water fountain buttons. Both of these areas tied for second places as the dirtiest in the airport.

Airplanes are slightly cleaner than airports. Lavatory flush buttons take first place as the dirtiest spot on airplanes. These are about 3,000 times dirtier than the average house toilet handle. Tray tables follow closely behind, and after them, you’ll find seat belt buckles. According to a 2017 report by Thrillist, the FAA does not regulate how often or how thoroughly airlines have to sanitize their planes. This means that the decision is left up to the carriers, and unsurprisingly, they tend to lean towards saving time and money. Typically, cleaning crews will remove trash & wipe down lavatories, but that’s it. So, when do the deep cleanings happen? About once a month – at best.

Now that you’re informed, what should you do? For one thing, understand that the presence of germs doesn’t necessarily mean you will get sick. Always remember to sanitize or wash your hands after using those kiosks, and don’t let any of your travel snacks touch the bare surface of your tray table.

Look on the bright side, the future of flying could be squeaky clean. Airbus is exploring antimicrobial technology that someday could be injected into everything from tray tables and seat covers to touch screens. In Spring of 2016, Boeing announced a prototype for a self-sanitizing restroom that uses ultra-violet light to kill 99.99% of germs. Until this futuristic technology is ready, keep in mind that travel friendly hand sanitizer does exist, and don’t let these germs delay your flight.